Invest in the artists you love. 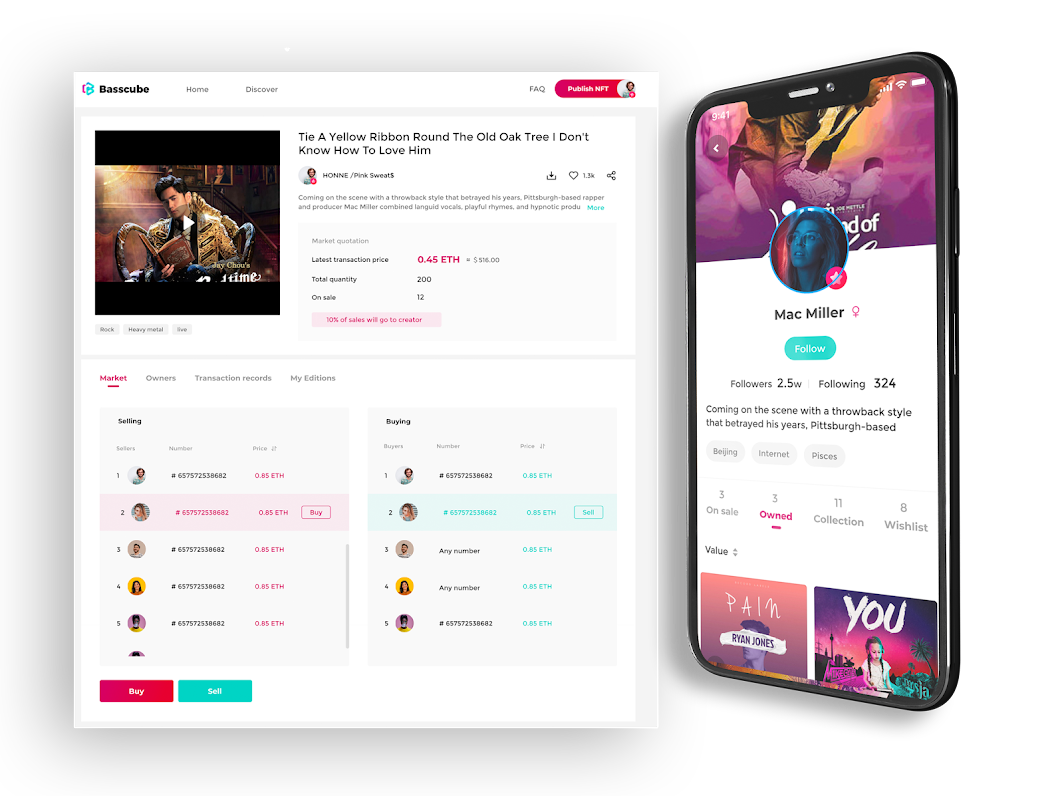 Did you know that Spotify pays artists $0.003 per stream?

Imagine putting you heart and soul into your work and having it valued at a fraction of a cent. That means that if 10,000 of an artist's fans all listened, Spotify would pay just $30 to the artist. Basscube offer musicians to ability take back control of pricing, earn livable income even with a small group of fans, and create truly special content for their biggest supporters.

The vast majority of royalty income never makes it back to creators.

As earnings filter down through labels, royalty chains, and complicated business processes, only a small faction of earnings make it to creators.

Basscube allows musicians to take back control of their work with direct-to-fan sales, instant payments, and transparent, trackable royalties.

The pay-per-stream model strips music of its true value.

In an art gallery where pieces can be bought, sold, and auctioned, one artwork can grow to hundreds of millions in value.

Basscube's NFT technology enables fans to own and invest in the content they love, benefitting both musicians and fans as content grows in value.

Our ownership model enables music to rise in value

How does it work?

Artists simply upload their content, set their sale price and royalty percentage, and our platform mints an NFT onto the blockchain.

Fans are notified of new NFT drops, and can buy or bid for content. Just like a stock, hot content can be re-sold for an increasing price, and royalty income comes back to the artist each time. That means that you can earn money just by buying the music you love, all while supporting the artist.

And, to the hipsters out there, now you can finally prove you WERE there first - it says so on the blockchain!

A greater share of profit than any other music platform

Chikk is a Multi-Platinum Pop songwriter and Inspirational singer who now calls Los Angeles, CA home. Chikk has written for Grammy Award winner Jennifer Hudson, Jordin Sparks, Iggy Azalea, and has penned multiple Billboard chart topping K-Pop hits for EXO, NCT, SHINee, Red Velvet and Girls Generation among other K-Pop bands. Although her pen game is literally world renowned, her talents don’t stop there. She has performed to sold-out crowds at LA‘sDodgers Stadium, the 2020 NAACP Image Awards After Party, and has also opened up for and performed with, Grammy Award winner Mali Music!
So, who is Chikk? At a very young age, she was encouraged by her mother and grandmother to hone her musical talents, and tap into her spiritual gifts. As she set out on her journey of becoming, those two gifts began to intertwine and evolve. Realizing that her gifts should be shared, she began writing and singing ‘life-affirming’ inspirational music for the world to hear.
In the middle of a global pandemic, Chikk released her second single, ‘Happy Now’ to remind and encourage people that their happiness is everything! Look for ‘Happy Now’ on all digital platforms, and on her debut EP, slated to be released in the Fall of 2021.

Check it out soon!

Our marketplace launch is almost here! Buy NFTs from your favorite artists, support creators to earn the income they deserve, and become a part of music history. Join to become a part of our the Basscube platform and gain exclusive first-supporter benefits!